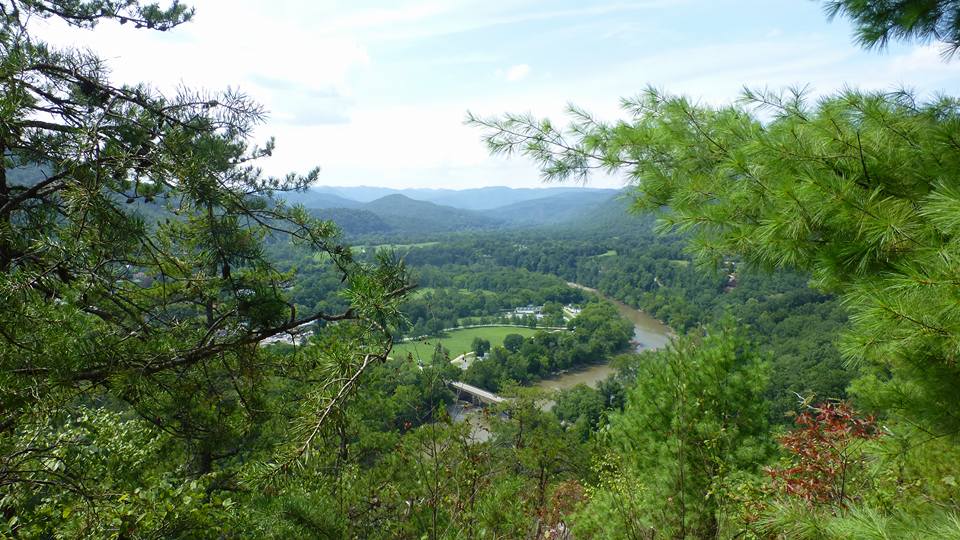 Martha and I woke up pretty early. After eating and packing up, we hiked the 5 miles south to her car. I resupplied my food bag at her car and then it was time for her to return to the big city. So much fun sharing the trail experience with Martha and her support this weekend and for the whole adventure has been invaluable. 🙂

I continued south on the trail toward Hot Springs. I saw rattlesnake #3 near Hurricane Gap. Yikes! I would much rather see a bear!

About a mile north of Tanyard Gap I met a day hiker named Dorito. She shared her apple slices with me and we visited for about 15 minutes. She works at the Greeneville, TN John Deer facility. Ends up that is where Dave and Danny work, too. She said that I had managed to meet ALL of the Greeneville John Deer employees that hike the AT in just two days. Haha.

I hadn’t planned to spend anytime in Hot Springs but as I neared town I became aware that my hiker hunger had come raging back in full force. I stopped at the Iron Horse Café and ate a very large linner or is it dunch??? (Lunch/dinner) or maybe I should just call it a large snack since I ate dinner later. It was really good and fueled the rest of my hiking day. I had planned to camp in a particular area but as I arrived at the site, I saw 3 adult bears. That makes 22 bears I’ve seen. I decided to hike on a mile further and camp there.

Once in my tent, I checked in on my online class. Classes don’t start until Monday but they can start online classes over the weekend. Looks like I’m going to have a good group because over half had already posted their introductions to the discussion board. I responded to their posts and answered a few questions before letting the crickets sing me to sleep. ‪